When Revealed: Each player chooses up to 3 characters he or she controls. Kill each character not chosen (cannot be saved). 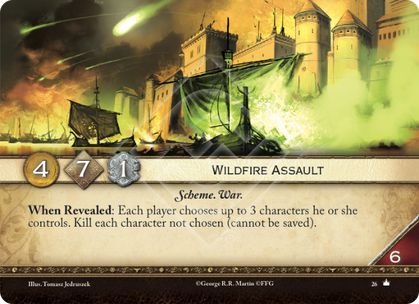 If a single effect affects multiple players simultaneously, but the players must individually make choices to resolve the effect, the first player chooses first, followed by the other players in player order.

So the First Player chooses his characters first, regardless of who revealed Wildfire Assault. After all players choose their characters, each character not chosen is killed simultaneously, and any interrupts like Shireen or Bastard Daughter (which are resolved before the kill resolves, but after it initiates) alternate between players, starting with the first player.