Interrupt: When Ser Davos Seaworth is killed, return him to your hand instead of placing him in your dead pile.

"King Stannis is my god. He made me and blessed me with his trust."
Thomas Denmark
Core Set #50. 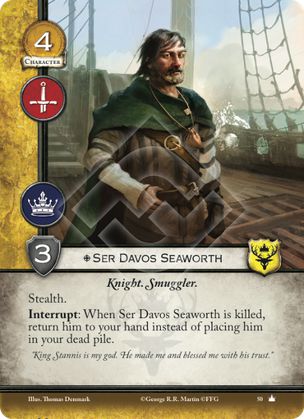 Because Davos' ability is a replacement effect, he is not returned to your hand by the resolution of his own Interrupt. Rather, when his ability resolves, it modifies the way the effect that killed him (Wildfire) resolves (returning him to hand instead of placing him in the dead pile when he is killed). So, Davos remains on the table until Wildfire actually resolves.

By contrast, because Ser Waymar's Interrupt ability is not a replacement effect, it must resolve (and discard the card) before the effect that kills him (Wildfire) resolves. End result -- Davos will always be on the table when Waymar resolves, no matter which of the two Interrupts is triggered first.