Action: Put a character with printed cost 5 or lower into play from your hand. Then, return Arianne Martell to your hand (cannot be saved). (Limit once per phase.) 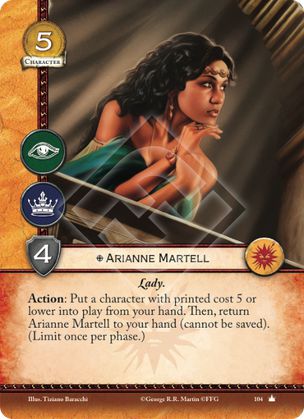 Is the chosen character revealed before the decision to cancel? Yes.

Part of declaring your intention to trigger Arianne is to indicate which character you intend to put into play, which will be revealed (though not leave your hand) when checking the play restrictions for triggering the ability (Step 1 of the initiation sequence RRG page 10). As such, the decision to cancel (in Step 6) is made with full knowledge of which character will actually be put into play by the successful resolution of the ability.

Also, when you cancel an ability, you cancel its effects (as opposed to its costs). Since Arianne has no costs, if you cancel her ability, the other character never leaves your hand (it stays there), and since it never enters play, Arianne is not returned to hand.

Can I use Arianne to add a duplicate? Yes.

Unique Cards, RRG p. 22: "A player may marshal (or put into play by a card ability) additional copies of each unique card he or she owns and controls, placed as a duplicate on that card, for no cost." This establishes that using Arianne's "put into play" ability on a copy of a unique card you already have in play will make that copy enter play as a dupe on the first.

Taken together, you CAN dupe a character with Arianne's ability, which does not count as a character entering play, so Arianne is never returned to your hand.

scantrell24 3296
Can I then use Arienne's ability to put in play a copy of herself? — fafranco82 1 9/2/16
Yes, kinda. That copy will enter play as a duplicate on Arianne, and the "Then, return..." part of the effect will fail to resolve (same as using her to put into play a duplicate of any other character). — mplain 213 5/22/17
What happens to attachments on Arianne? — fschell 1 9/3/18
As this came recently up on theironthrone.net (TiT): You cannot use Arianne as target if you bring in Ramsay Snow. TiT will let you target her nevertheless and allows you to take her take to hand. That is incorrect at the moment of writing. You must choose a target other than Arianne. FAQ 1.8 explains this. Thanks to Odrl! — Feuerbart 41 5/7/22