While Catelyn Stark is participating in a challenge, your opponents cannot trigger card abilities.

I take no joy in mead nor meat, and song and laughter have become suspicious strangers to me. I am a creature of grief and dust and bitter longings. There is an empty place within me where my heart was once.
Tommy Arnold
Core Set #143. 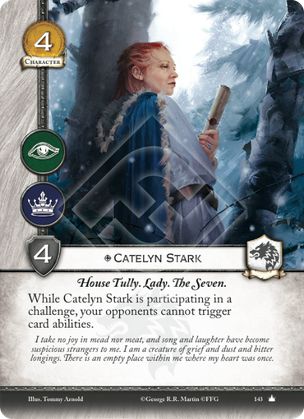 The following FAQ is taken from The) Unofficial FAQ on the CardgameDB forums:

What does Catelyn Stark prevent?

However, she does stop pretty much everything else - including events. Since the limitation Catelyn is placing is on the player, not the cards themselves, she's not "restricted" to only affecting cards in play.

agktmte 1470
how it works with shadow cards, and bring out of shadows, or ambush? can my opponent put in play or trigger his abilities?? — naitz 3 9/1/18
Catelyn only stops triggered abilities, i.e. abilities with the boldface precursor such as actions, reactions, and interrupts. However, she does not stop anything with 'forced', since that is the game triggerring the ability, not catelyn. — prancingPWNy 104 4/4/19