Action: Kneel a Dragon character or Daenerys Targaryen to choose a participating character. Until the end of the phase, that character gets -4 STR and is killed if its STR is 0. 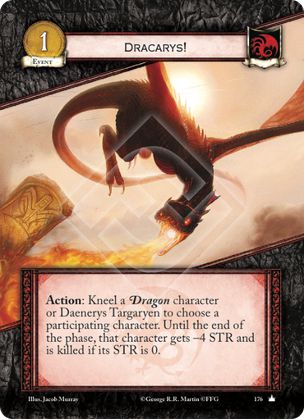 Can a duplicate or Bodyguard save from Dracarys? No. RRG pg 19: If a constant ability or lasting effect imposes a condition upon a card that would continually drive it from play (for example, a lasting effect that applies to a character over a period of time, and kills that character if its STR is 0), any attempt to save the card must also remedy the ongoing condition. Otherwise, upon resolution of the save attempt, the card is immediately re-exposed to the ongoing condition, and removed from play. Therefore, if the save effect does not also remedy the ongoing condition, it cannot be initiated, as the effect has no potential to change the game state. As such, using a duplicate to save from such an ongoing condition is also prohibited.