Reaction: After the challenges phase begins, choose a player. That player may give you 1 gold from his or her gold pool. Until the end of the phase, if that player has not given you gold this phase, he or she cannot initiate challenges against you.

Tiziano Baracchi
The Road to Winterfell #29. 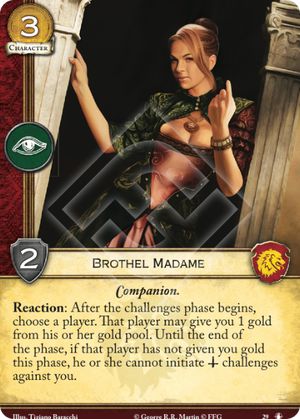 scantrell24 3239
I disagree with this interpretation. In my opinion the text says the following: At the beginning of the phase you chose a player (valid in melee , where there are more then 2 players). It does NOT follow that he needs to pay right away. It says plainly on the card "until the end of the phase" . So he can pay if & when he does military. — NickName 1 11/4/16
If an effect is not an explicitly lasting effect (as in the Brothel Madame's "Until end of phase" ability), it does not persist after the action is resolved. In this case, the "That player may" effect is not included in the lasting effect, and therefore does not last past the resolution window. If you interpret things in the opposite manner, that no action effects ends until there is explicit text saying so, you get absurd results where most action effects would never end at all: not at the end of the phase nor even the end of the round. — maneckn 2 1/5/17