Interrupt: When claim is applied for a challenge in which Mirri Maz Duur is attacking alone, choose a character controlled by the losing opponent. Instead of the normal claim effects, kill that character.

"The Great Shepherd sent me to earth to heal his lambs, wherever I might find them."
Marius Bota
Calm over Westeros #93. 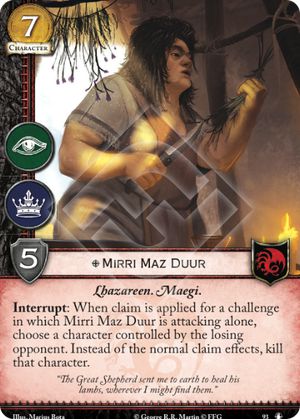 Claim replacement effects are triggered during the C step of DUCK (after Determining the winner and gaining the Unopposed bonus but before Claim is applied). These effects do not resolve immediately, rather they modify the way claim will be applied after all interrupts are played. For example, with Mirri Maz Duur you choose a character, and set up an effect that will kill that character when claim resolves. But after you trigger Mirri, and before you resolve claim, your opponent might play his own interrupt to applying claim (like Vengeance of Elia) and set up a new effect that will modify the way in which claim will resolve. This new replacement effect will override the previous one. Once all players are done playing Interrupts to "when claim is applied", resolve the claim in accordance with the most recently played replacement effect.

Mirri's "attacking alone" triggering condition is checked when claim is applied. Any characters that were attacking with her but were removed before claim (step C in DUCK) are irrelevant. For example, you can attack with Mirri and The Hound, bounce the Hound in step D, and trigger Mirri in step C.