Reaction: After a phase begins, kneel The Eyrie to choose a character. Until the end of the phase, that character cannot be killed. 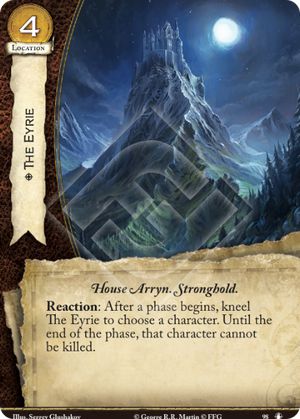 scantrell24 3295
Does the Eyrie allow you to choose a character in your hand? What about a character in a pile? What about a character that is not in the game (yet)? — Prof*Joe 1 1/31/17
No, unless explicitly mentioned, when a character is chosen for a card ability it must be a character in play. — scantrell24 3295 1/31/17
If you choose to target a unique character of your opponent that is duped with the Eyrie, is your opponent still forced to select another character for military claim or can he/she use the dupes of the selected character to soak claim? — Statusunquo 1 4/1/17
How does it work with cards like Dracarys? Both 'Until the end of the phase' ends simultaneously and char will stay alive or in order of being played and char will die? — Martozar 233 4/13/17
@Statusunquo, a character protected by the Eyrie is ineligible to be chosen for military claim, even if it has a dupe or any other potential save — scantrell24 3295 4/14/17
I do not understand how this card can prevent a death from Wildfire Assault. The Timing and Gameplay in the reference book does not allow players to play actions until AFTER the plots are revealed and abilities resolved. — Madus 8 4/23/17
@Madus, the Eyrie's ability is not an Action, but a Reaction to the phase beginning. — scantrell24 3295 4/23/17
What happens if you kneel the Eyrie and choosr a character, then someone uses Nightmares on tnr — Xavaerys Targaryen 1 4/29/17
@Xavaerys Targaryen. Nightmares on Eyrie after the Eyrie has already been triggered does nothing. Nightmares on the character chosen by the Eyrie will blank that characters PRINTED text box, but not any gained abilities, such as that granted by the Eyrie. — scantrell24 3295 4/29/17
@scantrell24 aha, of course. Thank you for the heads up! — Xavaerys Targaryen 1 1/30/18
If you play Nightmares on The Eyrie, will the effect of the location on the character's card remain? — Lalov 1 6/13/18
If you play You Murdered her children on a character protected by the Eyrie, does the character dies at the end of the phase ? Same for poison effects from Tyene, or tears of lys ? — Ilitchor 1 8/1/18