Attached character gains the Drowned God trait and cannot be chosen as the only target of opponents' events. 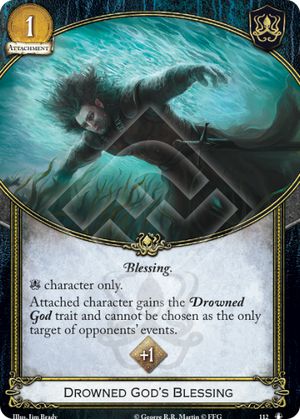 scantrell24 3295
does it protect against mutiny at caster'crest? — Normandwizard 20 8/28/17
Q: If a character already has the "Drowned God's Blessing" attached, and then defender is protecting against military claim by playing "Risen From the Sea", can the Stark "The Pack Survives" be used to interrupt "Risen From the Sea"? In other-words, am I playing the Interrupt on the Character or the Event itself before it reaches the Character. — Jadehope 75 10/15/17
Yes, pack survives can cancel risen. Drowned God's blessing has nothing to do with it, as the character is not targeted. — scantrell24 3295 10/15/17