When Revealed: Move a character from your dead pile to your discard pile. Then, if there are no Winter plot cards in play, draw 1 card. 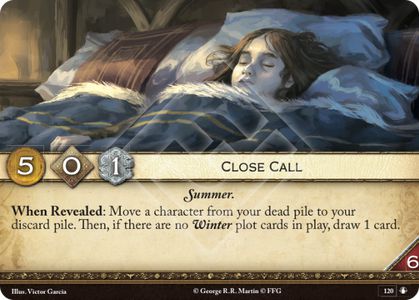 If you don't have a character in your dead pile, you won't get to draw a card.

The word "Then" indicates that that the pre-Then part of the effect must successfully resolve in order for the post-Then part to be able to initiate.

mplain 221
I disagree. Then indicates the order in which to deal to deal with each effect. It does no convey dependency. The word "then" indicates "time" not "cause". As with the syntax in similar games, cost and effect are usually separated by a comma, while independent effects are separated by a full stop. — Lorkan 1 5/20/16
I agree with mplain per the entry "Then" in the Rules Reference. — Stormborn 301 6/5/16
Unlike in similar games, in AGOT the word "Then" indicates cause, not time. thronesdb.com/rules#The_word_Then — mplain 221 7/20/16
mplain is correct. From the RRG: If the effect text of an ability includes the word “then,” the text preceding the word “then” must be successfully resolved in full (i.e. the game state changes to reflect the intent of the pre-then aspect of the effect in its entirety) before the remainder of the effect described after the word “then” can be resolved. If the pre-then aspect of an effect does successfully resolve in full, the resolution of the post-then aspect of the effect must also attempt to resolve. If the pre-then aspect of an effect does not successfully resolve in full, the post-then aspect does not attempt to resolve." — scantrell24 3295 7/20/16
But i move a charachter card or a charachter? I means, if i have 2 copy of same charachter in dead pile, do i move both? — ram_muai 105 8/19/16
Just move one — adam_geek 457 5/16/17