Interrupt: When a unique character you control would be killed, sacrifice Jory Cassel to save it. Then, if there is a Winter plot card revealed, that character gains 1 power.

Josh Hass
Wolves of the North #8. 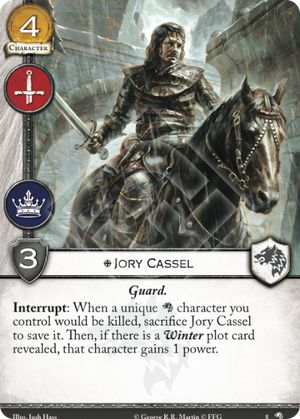 Jory Cassel can sacrifice himself to save himself from being killed, so he'll end up in your discard pile rather than your dead pile.

Also, if your opponent wins a 2 claim military challenge against you, it's legal to choose Jory and another unique Stark character, then sacrifice Jory to save the other character, and you've satisfied the 2 claim even though nobody died.

Finally, Jory can save Catelyn Stark (Wolves of the North) from terminal burn (Dracarys, etc) if there's a Winter plot AND the power added to Catelyn increases her strength (via her constant ability) enough to move above 0 strength. Basically, the effect saving the card can take into account other constants/lasting effects (in fact, it has to as we're taking into account all modifiers to STR, and the "killed if 0" effect). Note that you still can't 'anticipate' other triggered abilities or the application of new modifiers - only how all the current constants/lasting effects interact.