House of the Undying

Challenges Action: Remove House of the Undying from the game to choose an opponent. Put each character in that player's dead pile into play under your control. At the end of the phase, return each of those cards to its owner's dead pile (cannot be saved). 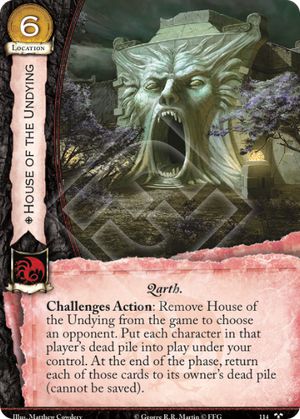 mplain 220
What happens if one character in the dead pile is also in play at the same time (because of Heads on Spikes discarding this character, while this character is in play) ? — Benji 764 4/5/17
That character will not be able to enter play because his owner already has another copy of it in play. See FAQ (1.3): https://thronesdb.com/faq#Unique_cards — mplain 220 4/5/17
What happens if The Hound wins a challenge, and the controller does not discard a card to keep him in play? Does he go back to the owners hand and remain out of the dead pile?? — nflenz 1 8/1/17
Yes. Cards always go to their owner's out-of-play areas (not their controller's), and when a card leaves play, all lasting and delayed effects affecting this card expire for it. See RRG entries for "Ownership and Control" and "Leaves Play". — mplain 220 8/2/17