Chella Daughter of Cheyk gets +1 STR for each ear token she has. While she has 3 or more ear tokens, she gains intimidate and renown.

Reaction: After a character is killed during a challenge in which Chella Daughter of Cheyk is attacking, place an ear token on her. 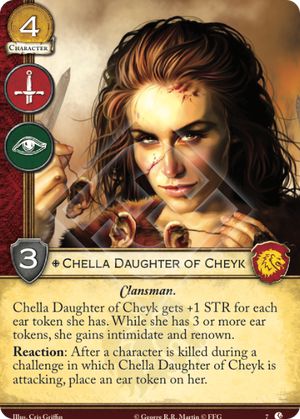 scantrell24 3295
What happens in the interraction Chella vs Davos, if Davos save himself ? — Benji 764 1/3/17
Davos doesn't save himself, he just goer to your hand instead of the dead pile, but he is still considered killed. — mplain 221 1/23/17
If Shagga Son of Dolf enters play using ambush after you initiate a challenge with Chella, and you kill a Lannister character you control, would that count towards one of her ear tokens? — DarthNymeria 1 2/4/17
@DarthNymeria, yes. It doesn't matter how the character dies, or who controls it. — scantrell24 3295 2/4/17
Can she work with Tears? — corwinofamber 1 3/3/17
@corwinofamber, no because Tears kills the character at the end of the phase, not during the challenge. — scantrell24 3295 3/4/17
So if you have Chella in an INT challenge that triggers Rains of Castamere and you flip Wildfire Assault does she get an ear token for every character killed by the wildfire? Does this include your own characters? — CMonster907 21 3/29/17
@CMonster907, yes, she gets an ear token for every character killed, including your own — scantrell24 3295 3/29/17
I'm assuming a claim of 2 or higher will proc this reaction more then once, even though they technically die at the same time? — MattAtaek 1 12/24/18
0

What’s great about Chella is that she can fit in any deck—not just the clans. Gaining +1 power for each character killed in her challenges, throw in a PTTS and she finds an easy way to get her renown and intimidate. Unfortunately, to really get her going does take some time and winning all the MIL challenges. Plus, she’s a great target for Ward!