Margaery's kindness had been unfailing, and her presence changed everything.
Kate Burmak
All Men Are Fools #3. 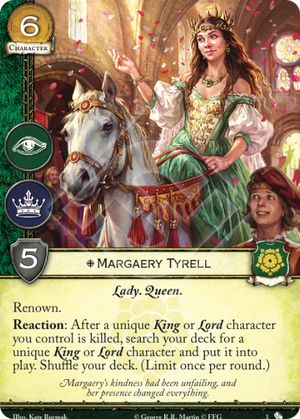 mplain 213
does valar mean the charachter put in play also dies? an opponent referenced me that apparently a judge said so, I am pretty sure it's not the case though — GARL1CD0G 37 4/13/17
Margaery is a reaction to kill, and Valar kills all character simultaneously. So you trigger Marge after Valar has resolved. No, the new character will not be killed (unless both players revealed Valar). — mplain 213 4/13/17
Can Margaery find d a character who is already in the dead pile? That character couldn't enter play, but if she can force a deck shuffle, is that enough of a change of game state for the ability to resolve? — theamazingmrg 8 1/11/18
You can always fail to find when you search. So even if there are no Lord or Lady characters left in your deck, you can still trigger Margaery's ability to shuffle. — mplain 213 1/11/18