While Margaery Tyrell is attacking, she gets +1 STR for each defending character.

Reaction: After Margaery Tyrell is declared as an attacker, choose and kneel a character controlled by the defending player. That character is participating in the challenge as a defender. 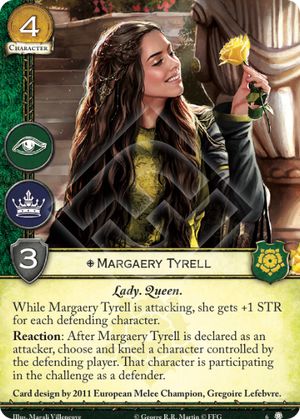 mplain 213
Cannot: The word "cannot" is absolute, and cannot be countermanded by other abilities. — SadYear 2 6/29/17
I would like a more detailed explanation of the interaction of Margaery with "cannot be knelt" and "cannot participate" cards, given the definition of "Cannot" in the RRG (see above). Tyvm in advance! — SadYear 2 6/29/17
Margaery can kneel a character that cannot participate, or bring into challenge a character that cannot be knelt. Two parts of her effect are not inter-dependent: if one part cannot affect the target, but the other still can, then the ability as a whole can trigger and resolve. This is different from the version of this card from the First Edition, where the "make participate" effect was dependent on the "kneel" effect (via the word "Then"). — mplain 213 7/5/17
"chose and kneel a character controlled by defending player" - is that an effect of this card or is it a cost to make the defending character participate the challenge? — Krišs 2 12/8/17
I am asking this to understand how Margaery interfere with Ygritt as Ygritt can not be knelt by a card effect, but can be knelt to pay a cost. — Krišs 2 12/8/17
Costs are written in a "do X to do Y" format. Margaery does not say "kneel a character TO make it participate", so kneeling is an effect, not a cost. Plus, costs can only be paid with game elements you control, so the game mechanics do not provide for the possibility to kneel an opponent's card to pay a cost. — mplain 213 12/8/17