Your King Commands It 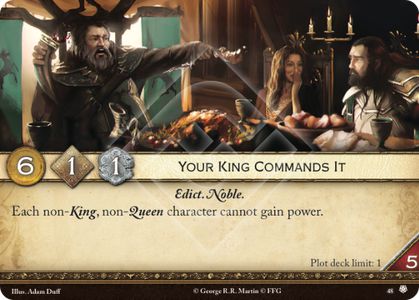 Was wondering how to use this card efficiently as part of my deck? I mean does it block every power gain even for power claims? Or is it just to stop characters with "renown" keywords from gaining power if they're not Kings/queens? The latter seems to make it useless unless you just want gold considering not a lot of decks in general have tons of renowned cards in the first place. Be great to know if I should leave it in my deck or put it with my "cards that don't do much" piles?

Oceanights 1
Your King Commands It blocks all non-king/queen characters from gaining power, either from renown or through other passive power gain abilities (e.g. 7-cost Catelyn Stark, Consolidation of Power). It is a good card to shut down certain rush decks, like Tyrell 'knight'-heavy decks, which rely on lots of characters gaining power from renown. — JakeMalone 46 12/31/18