The Seven character only.

Reaction: After attached character is knelt, choose a location or attachment. Until the end of the phase, treat that card as if its printed text box were blank (except for Traits). 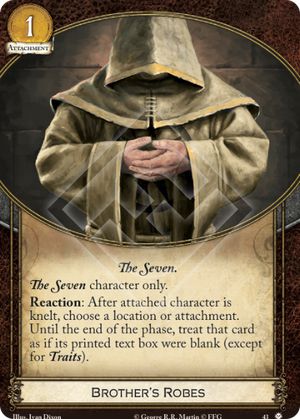 scantrell24 3230
Who decided THIS!? It's an attachment like any other, if it discards an attachment, then it should discard them all, (which is way OP.) "Risen from the Sea" makes sense, because it's not an attachment and only the text makes it so, but location attachments are still attachments regardless of blank text. — Simonmmm 1 5/4/18
The rules state that attachments can only go on characters unless the text states otherwise, and if the game state becomes illegal then the attachment is discarded. Put the two together and there you go. — scantrell24 3230 5/4/18
But there's a no good reason for that, all it means is every location attachment is massively over-priced and weak, and the original rule was obviously just lazy defining, otherwise why make an entire class of illegal cards. Much better to expand on the original definition, than to ruin a chunk of the game. — Simonmmm 1 5/4/18
Simon, we have learned many times over the years that some cards are better in certain interactions and the RRG is what we have to go off of unless rules are changed. This ruling is pretty clear. The good reason is that the RRG says attachments are not naturally allowed to go on non-characters, therefore, if the attachment no longer says it can go on non-characters, its illegal and the attachment goes away. Not much room open for debate here. The attachment is niche and will be rarely played (though its in my Seven build now) so its probably not worth getting angry over. — euphius 242 6/18/18