No attachments except Weapon.

While Jon Snow is standing, he is considered to be participating in each challenge in which you control another attacking character. 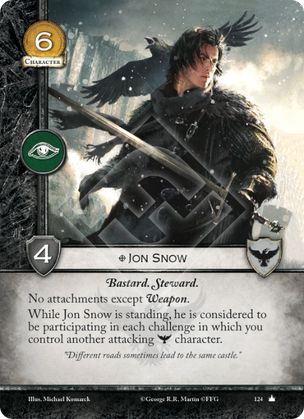 Furthermore, if another Night's Watch character you control is attacking, Jon Snow is automatically in the challenge -- whether you want him to be or not.

The defending player cannot attempt to remove a Jon Snow that is participating, via his ability, from the challenge, because the ability will instantly reassert itself. They can, however, remove the other attacking Night's Watch character(s), and if there is no longer another attacking NW character then Jon Snow will stop participating as well.

scantrell24 3297
Clarification question: after using his ability, do I have to kneel John Snow? — ovidenov 1 7/21/16
No. — mplain 213 10/7/17
Assuming there are no modifiers in play to give him other icons -As he only has an intrigue icon, is he only considered participating in intrigue attacks? — Luke@me 21 4/27/18
No. Icons are necessary for being 'declared' as an attacker. Jon Snow is not declared normally, but rather his game text says he is participating automatically when the conditions are met (standing, another attacking NW character). @Luke — scantrell24 3297 5/14/18
So if I have an monocon character attacking in a military challenge (strength =1) Jon Snow participates, even without a military icon to bring the strength up to =5? — Luke@me 21 3/14/19
Correct. — scantrell24 3297 3/14/19