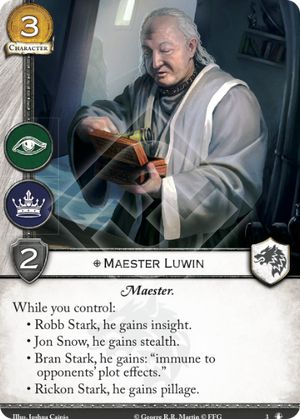 1) Each ability is granted to the character it previously refers to (e.g. Robb Stark gains Insight, not Luwin). This is according to the convention of any repetitions of the same proper name being replaced by a pronoun - and, as is usually the case in english, the pronoun replaces the nearest (prior) noun. For any ambiguity, see a card like "Summer (Core)" (While you control Bran Stark, he gains insight)

2) Bran Stark is granted immunity to opponent's plot effects. As this is the first instance of immunity we have, it has raised a few questions: -He survives Wildfire, even if you do not choose either Luwin or Bran (whom you actually cannot choose) to survive. This is because the plot effect is applied simultaneously, killing all non-chosen characters. There is no moment where Luwin is dead but Wildfire's effect on Bran is still pending. -Marched to the Wall: Bran Stark cannot be chosen to be discarded to Marched to the Wall. -Fortified Position: As it blanks Luwin's text, it will also affect Bran (who is no longer granted Luwin's protection).

3) Jon Snow gains stealth. Currently, the only Jon Snow is Jon Snow (Core), a Night's Watch character. The exact text on Stealth says "When a player initiates a challenge, for each character with stealth he or she declares as an attacker,", but Jon reads: "While Jon Snow is standing, he is considered to be participating in each challenge in which you control another attacking [Night's Watch] character.". Note that this method of participating in a challenge is NOT considered declaring him as an attacker, so he would not be able to bypass anyone with stealth. He can, however, still use his stealth defensively (he can no longer be bypassed by stealth), as well as offensively if he's declared for a challenge (e.g. an intrigue challenge) through regular means, rather than his ability.