Action: Pay 1 gold to attach Lady to a different character. Then, if attached character is Sansa Stark, stand her. (Limit once per phase.) 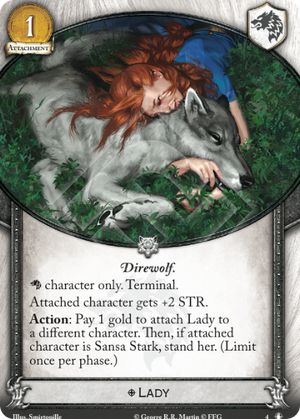 RRG, p. 12: Limits and Maxima: “Limit X per [period]” is a limit that appears on cards that remain in play through the resolution of an ability’s effect. Each copy of an ability with such a limit may be used X times during the designated period.

Since these limits are on the number of times each a card's ability can be used in a particular time period, it is better to think of the limit on Lady referring to the number of times you can trigger or initiate the ability each phase. Since both of the ability's effects ("move" and "then stand") share the same trigger, the limit effectively applies to both.

If my opponent tries to kill my character of strength 4 with Dracarys!, can I use an "Action" effect to save the character? No, both Dracarys and Lady / Margaery / Iron Fleet Scout are "actions", which are taken in alternation between players and resolved fully before the next one can happen. If your opponent plays Dracarys and you don't have a way to "interrupt" it (a cancel, like Bran or Hand's Judgement, or a save that also gets your character out of the 0 str range, like Risen from the Sea), then they'll die when it resolves. After that, there's an opportunity to react to its use (e.g. Joffrey, reacting to the death), but that won't change what happened.

Once all reactions are passed on, you move on to the next player's action. In the case of moving Lady... it would be far too late. Just like Margaery and Iron Fleet Scout, ambushing in Widow's Wail, etc - all of which are actions - you're going to have to anticipate and deny the Dracarys!, rather than 'react' (in the english language sense, not the game rules sense) to it.