Interrupt: When a character would be killed for claim, pay 2 gold and put Podrick Payne into play from your hand to save it. Then, if that character was Tyrion Lannister, you may pay 2 gold to choose and kill an attacking character.

Tyrion had never quite gotten over the suspicion that his father had inflicted the boy on him as a joke.
David Auden Nash
Tyrion's Chain #109. 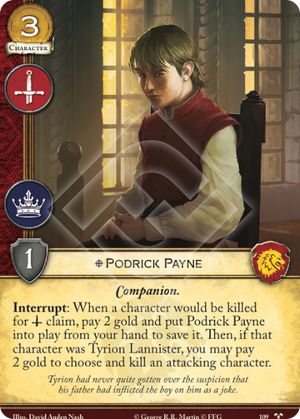 mplain 206
Used this little dude to kill a fully-loaded Red Viper with massive strength. If the challenge had gone through I would've lost. Worth it just for that. — Bill Schitz 1 11/26/17
Note that The Red Viper's reaction ability fires before military claim ;) — mplain 206 11/26/17